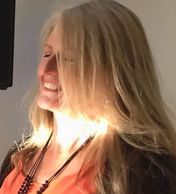 I am a medium working in The Netherlands and worldwide, face to face or through Skype. I'm a certificate holder of the Spiritualist National Union (SNU in the UK) in teaching, demonstrating mediumship and public speaking; CSNU t, d & s.

I have not always been aware that I was a medium, but at some point in my life I couldn't ignore it anymore. It was than that I decided to investigate and find out. At that point I was introduced to the world renowned Arthur Findlay College where It quickly became clear that I am a psychic, a medium and a healer.

​A psychic reads o.a. your energy.  A medium does that too, but also has contact with people in the spirit world. I am merely the person in between this physical world on earth and the Spirit world. This is also the case when healing energies are given to help you with physical, emotional or any other problem.

I've worked on platforms in The Netherlands, UK and New Zealand with great pleasure.

Knowledge and development in mediumship and as a person is important. So I regularly went to the Arthur Findlay College for the advancement of Spiritualism and Psychic Sciences in England. This is a worldwide known and respected college for mediums where I joined courses and met colleagues from different countries. I'm also took classes elsewhere with respected tutors.
Amongst my tutors were Eileen Davies, Tony Stockwell, Glyn Edwards, Matthew Smith, Kitty Woud, Val Williams, Mavis Pittila, Steven Upton, Stella Upton, Colin Bates, Sandie Baker, Paul Jacobs and many others.

Other workshops I attended in The Netherlands include Reiki I, II and Master, Quantum Touch, Trance Healing, Mediumship on many different subjects, Shamballah meditation, meditation training with David Ji (the Deepak Chopra Centre) and Tijn Touber.

- registered at the Chamber of Commerce in Utrecht as Spirit Talks, number 30280130 and
- a certificate holder of the SNU (Spiritualists National Union, UK) in teaching, public speaking
​  and demonstrating, CSNU t, d&s
- is an individual member of the SNU in the UK and is
- a member of the SNUi (SNU International)